Appointments to see a vascular or a plastic surgeon can be made for every workday at the Reconstructive Surgery Clinic (Pärnu mnt. 104, Tallinn) located on the 3d floor of the Magdaleena Hospital. 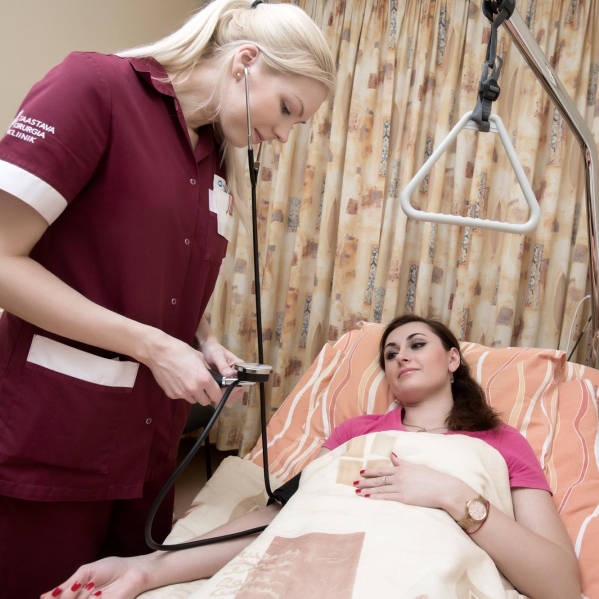 Reconstructive cardiovascular surgery deals with restoration of blood flow when it has ceased or is impeded in a body part. Lack of blood flow is caused mainly by:

Atherosclerosis or hardening of the arteries is a degenerative disease in the process of which deposits of fatty substances (plaque) build up in the inner lining of an artery, resulting in hardening of the artery. Plaques can grow large enough to significantly reduce blood’s flow through an artery. Most of the damage occurs when they become fragile and rupture. Plaques that rupture cause blood clots to form that can block blood flow or break off and travel to another part of the body. Atherosclerosis is a slow, complex disease that typically starts in childhood and often progresses when people grow older. Men have an increased risk of atherosclerosis, the disease may manifest itself already in their 50ies. In comparison, the likelihood of women getting atherosclerosis is many times smaller and problems usually start 10 years later. The risk factors for the disease include age, male sex, high blood pressure, diabetes, obesity and heredity.

Arterial embolism is a sudden interruption of blood flow to an organ or body part. This is caused when the artery that supplies the blood to that organ or body part is blocked by an embolus (blood clot or atherosclerotic plaque) that has moved in the bloodstream from its point of origin to a new location.

Arterial emboli can affect the extremities – especially the legs and feet, that will feel cool, have muscle pain, numbness, pale colour and lack of movement. Some may involve the brain, causing a stroke, or the heart, causing a heart attack.

Process of the disease

If the blood vessel narrows or becomes blocked slowly, the organism has time to develop bypaths called collaterals. These may prove sufficient to guarantee the operational ability of the organ or limb. If the disease is acute and the narrowing or blockage of the vessel develops quickly, the blood flow must be restored farther away from the damaged blood vessel.

Surgical treatment of the disease (angioplasty)

Vascular surgery is about opening a new path for the blood. Blood is directed around the damaged part with the help of a shunt. It is also possible that after cleaning the damaged part, normal blood flow in the artery is restored. Radiological intravascular procedures are carried out in order to widen the narrowed part. Radiological procedures, however, are only feasible in the early stages of the disease when the damage to blood vessels is still limited. Angioplasty will bring relief to the patient but the disease itself is not cured by the surgery.

Atherosclerosis is a slow disease that usually develops in stages. Initially, it is just a feeling of cold in the legs. Next, difficulty of walking develops. Pain on walking or intermittent claudication manifests itself by severe pain in leg muscles (mainly calves) after walking a certain distance. As the disease progresses the distance that can be walked without feeling pain becomes gradually shorter. Surgery must be considered when the distance becomes less than a hundred meters. Eventually, ulcers will emerge on legs causing pain while resting- the pain will ease only when sitting or walking. In the final stage of the disease the pain is constant and a risk of gangrene develops.

In case of acute beginning of the disease, the limb turns pale, feels cold and is painful. Ordinary analgesics do not relieve the pain. Surgery is unavoidable, you should contact a vascular surgeon as soon as possible.

Appointments to see a vascular or a plastic surgeon can be made for every workday at the Reconstructive Surgery Clinic (Pärnu mnt. 104, Tallinn) located on the 3d floor of the Magdaleena Hospital.